Facebook claims to have removed 3.39 billion fake accounts during October-March

Facebook claims to have removed 3.39 billion fake accounts during October-March

Facebook recently published its Community Standards Enforcement Report providing the details of the last quarter (Q4) of 2018 and the first quarter (Q1) of 2019. According to the report, the social media giant claims to have removed a whopping 3.39 billion fake accounts during the six-month period from October 2018 till March 2019.

The world’s largest social media company attributed the rise in the number of fake accounts to automated attacks by bad actors who attempt to create large volumes of accounts at once. Most of such accounts are removed within minutes of being created, so they are not counted in Facebook’s monthly active user metrics, the company said in the report.
Despite this, the social media giant estimates about 5 per cent of its monthly active users are fake. Overall, Facebook said that it remains “confident” that most of the activity and people on its platform are genuine. 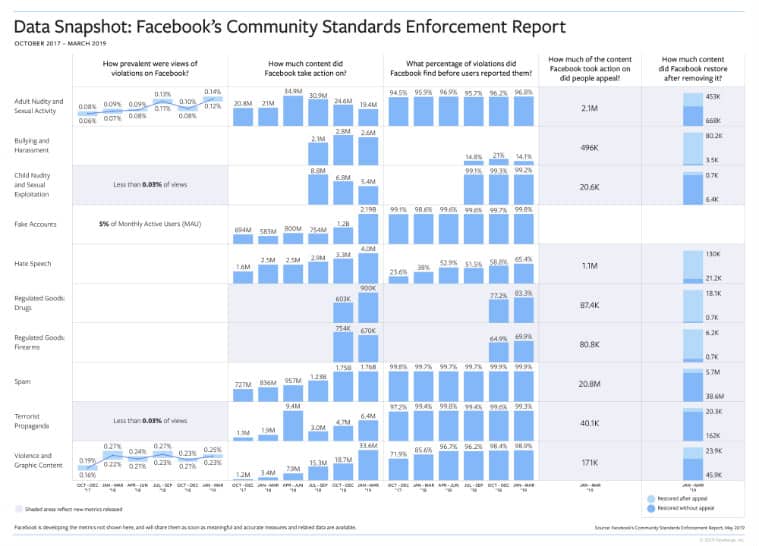 Apart from this, the social media company released details about how much of the removed content inspired appeals from users and how much was restored. The report also provides information about the volume of posts Facebook took action against for attempting to sell products that are not allowed on its platforms, such as drugs and firearms.

The company took action on nearly 1.4 million content which tried to sell guns and around 1.5 million content that tried to sell drugs, according to the report. The social network giant is also starting the use of artificial intelligence (AI) to detect and remove guns and drugs related posts from its platform. Facebook also reversed itself 152,000 times out of the 1.1 million appeals it heard related to hate speech, the report added.

To recall, earlier this month, Facebook had announced that it would place more restrictions on the use of its live video service. The company had said that anyone who breaks rules in broadcasting content on Facebook Live will be temporarily barred from using the service. Earlier, it did not bar users until they had broken these rules multiple times. This move came in wake of the Christchurch shooting where 51 people were killed and the suspect, an Australian citizen, had broadcast the attack live on Facebook.